A Creature Was Stirring

"A Creature Was Stirring" is the third episode in season one of R.L. Stine's The Haunting Hour: The Series. It first aired on December 25, 2010.

All Timmy wants for Christmas is for his family to come together and be happy -- and a demonic Christmas present may be the cure for that problem.

Timmy Morgan wakes up on Christmas morning, to find loads of presents under the Christmas tree. Timmy's older siblings Mark and Becky are very unhappy with their presents; however, Timmy is very happy with the nice presents that Santa got him, suitable for his age. Unknown to the kids, their parents are planning to get a divorce. Meanwhile, when everyone leaves the living room but Timmy who just wishes that his family would start getting along again, he notices a present under the tree that had appeared out of nowhere. There appears to be something moving inside of the present. When Timmy opens the present, he is shocked to find a hideous monster inside. When he alerts his parents, they think he has just created an imaginary monster. When Timmy tells his siblings, the monster follows him and creates a mess in the bedrooms and hallway. Their parents then come up stairs and find the hallway is a mess, as they clean up the hallway of the papers, Becky finds the divorce papers. Janice and Donald lie to the kids and tell them that it's just Donald's work papers. They then tell the kids that they must go to there rooms for Janice and Donald would deal with them later.

The parents then go to the basement and find feathers everywhere. The monster shows itself to Janice and Donald and starts a fire in the basement. They try to escape through the front door but find themselves snowed in. The monster then cuts the power and the family makes their way to the attic and immediately lock themselves in the attic.

While in the attic, the Morgan's reminisce about all the fun times they had together as a family before they grew apart and promise that if they get out of the house alive they'll forget about the divorce and become a family again. With the smoke rising up into the basement, the Morgans desperately try to find a way to escape. After they get out through the attic's window they witness the entire house burning on fire. At first, all seemed lost until Timmy brought out a picture of the whole family together and that's when the Morgans realize that they will all be okay as long as they have each other.

That night, a red limo pulls up next the house's rubble; Santa Claus rides in the back. He calls the monster back to him, revealing that he had indeed granted Timmy's wish, to get the family back together. This also reveals that the monster never meant any real harm to the family, it was just doing what Santa asked of it. 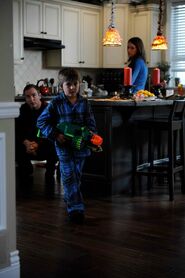 Timmy gets ready to fight the creature. 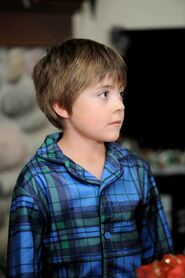 Timmy watching his siblings fight with their parents. 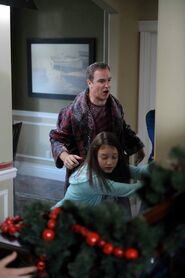 Donald and Becky run from the creature.

The first look at the creature.