Afraid of Clowns is the fourteenth episode of R.L. Stine's The Haunting Hour: The Series. It is based on the short story of the same name from Nightmare Hour.

Chris' childhood coulrophobia (fear of clowns) is put to the test when the circus comes to town and the clowns begin stalking him. Is Chris just anxious over his upcoming 13th birthday or do the clowns have something sinister in store?

Chris wants to celebrate his 13th birthday with Danica, his crush. But after she invites him to see "Kaptain Krazee's Clown Show" at the local carnival, Chris turns down her offer, as he carries a deadly fear of clowns from when he was little.

His best friend, Finch tells him there's no logical reason to be afraid of clowns. Yet Chris is still convinced that clowns are out to get him. As he rides his bike home, Chris notices a car slowly following him, he yells at the unseen driver, demanding a reason for his or her stalking. Much to Chris' horror a gang of creepy clowns step out of the car claiming "they are there for him" and one of them even knew his name. As he ran home, Chris tried to convince his father that clowns were after him, but he doesn't believe him at all saying clowns are entertain people and make them laugh.

The next day after turning thirteen, Chris finally decides to face his fears and goes see the clown show with Danica. That night during the show, Kaptain Krazee and the other clowns pick Chris to be their special volunteer for the final performance. Chris tries to run away but it is too late, as clowns grab him and trap him in a big jack in the box that they spin around really fast as soon as Chris was trapped in it.

As the clowns open the box, Chris came out with what seemed to be clown makeup stuck to his face and a wig on his head. Freaked out, he runs backstage. He tries to take it off, but to Chris' horror it does not come off. He gets an unexpected visit from his parents, who reveal that clowns are a humanoid species, themselves being clowns who wear human masks to blend into society, telling Chris that he is a clown too. All the clowns wish Chris a happy birthday and corner a horrified Chris with a set of new clown clothes, as he is now one of them.

Differences from the story 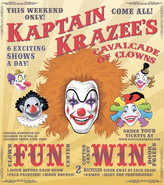 Chris getting getting shoved into the jack in the box.