Dreamcatcher is the twelfth episode of the second season of R.L. Stine's The Haunting Hour: The Series.

The camp legend of a mysterious creature who feeds on bad dreams appears to be true after a cabin full of girls have a recurring nightmare about being trapped in a web of a mutant spider known as the Dream Catcher.

It's Lisa's first day at Camp Pine Mountain and she is very nervous. When she makes friends with a girl named Amelia, a girl named Meg begins to bully her out of jealousy. While everyone else is asleep later that night, Meg tells Lisa about a tragedy that occurred at Pine Mountain 20 years ago when one of the campers died in her sleep after she had nightmares about a mysterious boogeyman called The Dream Catcher.

The camp counselor, Justine, tells a superstitious Lisa not to worry about the camp legend, and attempts to reassure her by saying she'll be fine as long as she has her dream Catchers. Later, Lisa and Amelia have the same nightmare about a strange spider-like monster chasing them. When they awake, they discover that Meg destroyed their dream catchers in the night. Lisa notices unexplained slits on her arm, but decides not to tell Justine. While the rest of the camp are telling stories around a fire, Lisa falls asleep on the log bench and has another dream in which the Dream Catcher assaults her. When she's woken up by a concerned Justine, she sees several more unexplained cuts across her arms and face.

That night, Lisa and Amelia stop sleeping completely in order to prevent their nightmares, where the Dream Catcher can physically hurt the dreamer. Lisa cuts Meg's dream catcher in an act of revenge. The Dream Catcher shows himself to Lisa and kidnaps Amelia, who accidentally fell asleep. Lisa tries to save Amelia but she is apparently woken by Meg, who heard her screaming. Finding the campgrounds mysteriously empty, Lisa ventures to a nearby cavern, where she hears Amelia's screams. Inside is a complex maze of spiderweb tunnels, in which Amelia is trapped. Lisa tries to free her, but both of them get stuck.

Meg follows her into the cave and takes Lisa's flashlight and told them that she is an only-child and doesn't like to share at all, leaving her and Amelia to die, but she too gets stuck in the web. Suddenly, Lisa's alarm clock goes off, revealing that the empty campsite had been a dream, saving her and Amelia. Meg, however, slept in the camp mess hall instead of the cabin and couldn't hear the alarm. The Dream Catcher appears in Meg's dream and slowly advances toward her, who frantically tries convincing herself she's awake. The Dream Catcher then says, "If you were awake, I wouldn't be here!" Roaring, with Meg screaming in terror one last time, hinting her death in real life. 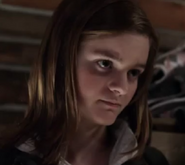