"Head Shot" is the seventeenth episode of the second season of R.L. Stine's The Haunting Hour: The Series. It first aired on January 28, 2012.

In this homage to/modern-day retelling of The Picture of Dorian Gray, a teenage ice cream shop worker named Gracie Wilde leaps at the chance to enter Teen Teen magazine's Prettiest Face contest, but the excitement of the contest and Cassandra Hobbes' coaching are turning Gracie into a cutthroat diva who will do anything to win — even if it means giving up her soul.

Gracie Wilde is working at an ice cream shop when Cassandra Hobbes, who is a scout for "Teen Teen" magazine, offers her a chance to do a photoshoot. Gracie says that she can't afford it, but Cassandra doesn't mind at all and says, "It's all about the desire." Lexi, Gracie's best friend, is skeptical about this.

After the photoshoot, Gracie's usual sweet behavior changes into that of a selfish diva and her headshot on her phone progressively becomes uglier. Gracie cheats on her mid-term and her friend Dylan ends up getting in trouble and suspended instead of her.

Gracie's other friend, Flynn, also gets a free photoshoot from Cassandra, which makes extremely Gracie jealous. Gracie, knowing Flynn's allergy to red dye number 3, puts the dye in her smoothie, causing Flynn's face to break out in hives.

Lexi is disgusted by Gracie's behavior and confronts her at the "Teen Teen" magazine debut, but Gracie refuses to listen to her warnings. Lexi sees the models on Cassandra's wall change from pretty to ugly. Soon, Lexi discovers that becoming a model under Cassandra corrupts the person, after which Cassandra steals their soul, having done the same to every teenage girl who wants to be known as "the prettiest face in the world". However, Cassandra claims to Lexi that all she does is offer encouragement and reveals that Gracie and the other girls on her wall are secretly shallow and cutthroat because they didn't turn down the offer by deleting their headshot. Lexi demands to know just who Cassandra is. Cassandra replies that Lexi already knows who she is before transforming into her true form: the Devil. Lexi faints. Cassandra assumes her human form and leaves.

When Gracie is chosen as the new face of "Teen Teen" magazine, Lexi wakes up and deletes Gracie's ugly headshot from her phone in an attempt to bring her friend back to normal. However, it is revealed the choice wasn't Lexi's; it was Gracie's and hers alone.

In an end narration, Lexi reveals that Cassandra was right all along. Gracie had the power all along to walk away from being famous. Because she didn't, Gracie's beautiful face now hangs on Cassandra's wall while her new and permanent face is even uglier than the headshot on her cell phone. 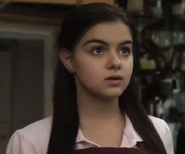