Pumpkinhead is the fifth episode of the second season of the TV show R.L. Stine's The Haunting Hour: The Series. It is based on the short story of the same name from Nightmare Hour.

Despite some recent incidents of kids vanishing, three siblings visit a farmer's scary pumpkin patch around Halloween. But the sinister, malicious, sadistic, and wicked farmer has more tricks than treats in store for them.

Since its Halloween, Scott wants to go trick or treating with his friends. But due to three kids going missing last Halloween, Scott and his siblings Allie and Dave are forced to trick or treat in their school's cafeteria. When Dave is disappointed that he only has small pumpkins to carve, Scott talks Allie into driving them to a farmer's forbidden pumpkin patch to get a bigger pumpkins.

As the siblings look for pumpkins, they discover a barn with a disturbing collection of pumpkin-headed "dummies" and a "protected" pumpkin patch. The territorial farmer catches them wandering around and tells them in a suspiciously threatening nature to never come back or they'll be sorry. Not wanting to leave empty handed, they take some pumpkins (which was Scott's unwise decision), before they go. Unknown to them, the three siblings are being watched and followed.

Back at home, Scott said that they should go back to Palmer's farm to have some "real fun", but Allie refuses because that will give her nightmares for a month. At that moment, she got a message from Patti and tells the boys that she can't come over because her parents don't want her outside at dark. Scott complains that everyone in town is really scared about what happened. When Dave was pumpkin carving he notices mealworms, making everyone scream and recoil. Allie thought it was another one of Scott's pranks, but Scott didn't do it. Scott cuts the second pumpkin and sees nothing in it, but Dave sees something. It's a tooth to Scott's observation. But Allie thinks it's a weird pumpkin seed. Scott soon throws the pumpkins away.

After a disappointing Halloween, Scott wants to redeem the night by going back to Palmer's farm, but Allie made it clear that they would never go back there. Scott is later kidnapped while making popcorn for a monster movie marathon. Allie (not knowing what really happened) assumes he ignored her and went back to Palmer's farm. Allie and Dave drive back to the farm to pick up Scott. Dave waits in the car while Allie searches for him.

While searching, she is attacked by pumpkinheads. It is revealed that Farmer Palmer took the three kids who trespassed on his farm the previous year, chopped off their heads and replaced them with his own pumpkins and turned their original heads into pumpkins. To Allie's horror, she finds that the same thing happened to Scott and now that she is surrounded by Farmer Palmer and his monsters, and will suffer the same fate. Dave is now fast asleep in the car while waiting for Allie, but it seems he won't have to wait any longer when Allie approaches the car now as a pumpkinhead.

Differences from the story 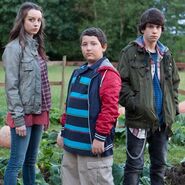 Allie at the Palmer's Farm once again to look for Scott (not realizing that she's already too late to save him). 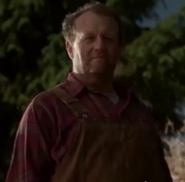