"Really You" is the two-part series premiere episode of R.L. Stine's The Haunting Hour: The Series. It first aired on October 29, 2010.

Spoiled brat Lily gets her own life-sized doll and names it, "Lily D.," but when her mom starts to care for the doll more than her own daughter, strange things begin to happen.

A girl named Lilly is given her very own life-sized "Really You" doll which is named Lilly D.; because she is good at manipulating her dad. Lilly remains a spoiled brat, bragging about Lilly D, even going as far as ripping the leg off a friend's doll, after the friend informs Lilly that "Lilly D hates Lilly." Soon after, strange events begin to occur which Lilly's mother accuses Lilly of doing; despite how Lilly maintains she is innocent, and that Lilly D is alive. Lilly's brother Brandon and his friend Josh were commenting on when Lilly spilled gravy on her mom's computer, but Josh says that she saw the doll did it, Brandon says Lilly didn't see it. Soon, Lilly’s mother starts to care more about Lilly D than Lilly; giving the doll breakfast and letting it sleep in her bed; the final straw being when Lilly's mother is convinced Lilly painted Bad Girl on her bedroom room wall, even though Lilly is once again denying her guilt; and Brandon and Josh prove that Lilly D is alive, or isn't.

Lily's brother, Brandon, suspects the doll is trying to get rid of Lilly since her mother seems to love the doll more than she loves Lilly as he tries to record what she does in the middle of the night, it shows that she is alive, but she takes the memory card out of his camera and his mother takes it away from him, after she realizes she was probably spying on her and Brandon takes her apart and finds words on the back of her head saying "Destroy this Doll".

Brandon and Josh try to solve the mystery of Lilly's new doll once and for all and discover that the doll is alive after going to the "Really You" building and the doll maker says that they built the building over her house thanks to her domineering husband and works in a basement and says all of the dolls have souls and pleased to be of who they are, But Lily D. was different, mainly she had a bad soul. Because of this, she wanted to be real, and not a doll. She became a bad girl as the maker tried to destroy her but the people didn't believe her. Lilly becomes sick and pale, which the doctor says is merely a virus. The doll does the unthinkable. Her mother says that she wished Lily D. was her daughter and Lilly begins a horrifying transformation, and she soon becomes a doll, and it turns out she switched places with Lily D. (Now Lilly)'s behavior is making Brandon suspicious.

The next day, Brandon notices the discarded doll thrown in the trash has Lily's birthmark on the back of her neck. Lilly is restored to her normal self because of her mother's love for her, While Lily D. is transformed back into a doll. She is lying in the middle of the street, and she is about to get back up, but before she can, Lily D. is hit by a garbage truck. The doll is seen on the side of a street by two girls. The doll grabs one of the girls, causing them to run away in terror.

The Temporary Guardian and Jill. 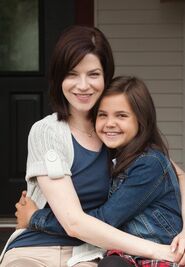 Alisen Down (Jill) and Bailee Madison (Lilly) posing for a picture. 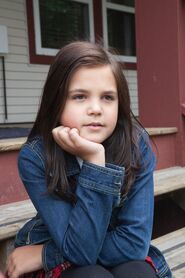 Bailee Madison (Lilly) getting ready for her next scene.

Brandon and Josh trying to get into the place were Lilly D came from.

Josh, Brandon, Lilly, Jill and Henry look on as Lill D gets hit by a truck.

Producer Billy Brown watching the filming of "Really You".

Josh and Brandon hide from the workers at the company were Lilly D came from.

Lilly and Lilly D. at the salon.

Brandon saving Lilly from being taken away with the garbage.

Brandon and Lilly running to catch up with Josh and Lilly D.