Scary Mary is the twenty-first and twenty-second episodes, as well as the two-part finale, of Season 1 of R.L. Stine's The Haunting Hour: The Series.

A self-conscious girl named Hannah becomes is kidnapped by mirror ghost, Scary Mary, who abducts girls from the real world and steals their beauty.

Hannah is a not-so-normal kid who doesn't like looking at her face in the mirror. One day while she's having a sleepover with some of her friends, they tell her that they want to play a game called "Scary Mary". When she says she doesn't know how to play, they tell her the story: there once was a girl named Mary, and she was obsessed with her looks. One day, her farmhouse caught on fire and she burned to death. Today, she is waiting for someone to chant her name, so she could take their face...", and become beautiful. Wow!

To summon Scary Mary, you must hold a candle in front of a mirror in a dark room, and say a poem. Then turn on the lights and look in the mirror at the same time. Hannah carries out the task, but nothing happens yet. Days later Hannah finds a compact hairbrush with an M on it.

Later Hannah sneaks out to go shopping for beauty supplies. When a friend calls her mom says she is grounded. Meanwhile, Hannah is in her room. She is applying make-up and brushing her hair with the M brush she found. Unbeknownst to Hannah girls with masks are in her mirror.

When her mom hears something she finds nothing in Hannah's room. After she leaves Hannah is revealed to be in Scary Mary's world because the girls in masks broke through the mirror and pulled her in.

While in Scary Mary's world, Hannah refuses to be like everyone else, who have given their faces to Mary. Mary uses the girl's faces to disguise herself as one of them, hoping that a boy will come to rescue the girl and take Mary out of her world, but nobody ever comes.

Hannah's friend Eric comes to find her and finds Mary with her face and realizes that it's not her. Mary's farmhouse sets on fire, representing what had killed her. He finds the real Hannah in a chest then gets back to the real world by going in a river full of Mary's tears. At the end Mary calls for Eric. 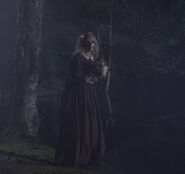 Hanna looks in the mirror.

Eric and Hanna make it back to their world.