The Dead Body is the fourth episode of R.L. Stine's The Haunting Hour: The Series.

Will meets a new boy named Jake Skinner, who helps him fight back against some bullies, but Will soon learns that Jake isn't exactly a new student...or a living one.

With the school dance coming up, Will wants to ask Anna to the dance, but every time he tries, two bullies named Travis and Chang humiliate him in front of her. Will meets a new kid, Jake Skinner, who offers to get rid of the bullies for him. They make a deal that Jake will get rid of them, and when he needs it, Will will pay him back. To do this, Jake pretends to be a dead body in front of Travis and Chang in the woods during a school nature walk, and sits up screaming, causing the bullies to panic and run away. Jake believes this isn't enough, so he "kicks it up a notch." Will asks Anna to the dance but discovers that what Jake did gave Travis and Chang panic attacks.

The Elderly Janitor hears Will mention Jake Skinner to Anna and comments that Jake Skinner died in 1961. Will finds an engraved photo frame memorial in the school trophy case from the 1960’s realizing he befriended a dead person. Will confronts Jake saying he is done and wants no more part in getting back at Travis and Chang. Jake refuses saying he is “Having so much fun.” Seeking answers he questions The Elderly Janitor about how Jake died in 1961, it is revealed it was a prank gone wrong. The day of the dance, Will calls for Jake who responds by yelling repeatedly "You owe me." Will heard music, saw a photo of President John F. Kennedy and found out that he was back to the day the Jake died in the gym. He watched the event reoccur as bullies lock Jake inside the storage area; throwing firecrackers inside setting it alight then run off.

Will opened the cage that Jake was stuck in but couldn't find him. Then Jake appeared outside grinning as Will continued to say. “I saved you we’re even now right?” Jake still grinning left the room. As Will blinded by smoke turns to leave a bookcase that was on fire landed on making him die in 1961. Will woke up and found he was back to 2011 seeing a photo of President Barack Obama. He went outside the room to meet Anna but Anna was ignoring him (so he thought). Jake came up and introduced himself and asked Anna if she wanted to dance. Will tried talking to Anna and apologizes for being late but she walked right through him, literally. The episode ended with Jake saying "Now we're even." He trades lives with him but not bodies and ends up having Jake alive and Will dead.

Will wonders why Travis and Chang scared him.

Chang getting scared by Jake Skinner.

Will trying to find Jake Skinner.

Strange things happen around Will as he walks home.

Travis and Chang show themselves after scaring Will.

Directer James Head directs the cast of "The Dead Body."

Will realizes Jakes a ghost

Jake tells Will the truth

Will is tricked to perish instead of Jake in 1961

Jake lets Will perish in the fire instead of himself

Anna can't see Will now he is a ghost

Will finds out he's a ghost

Will watching Anna from afar. 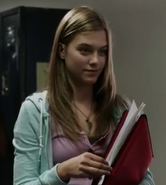 Add a photo to this gallery

- Played at the beginning of the episode & the end credits

Retrieved from "https://rlstinesthehauntinghour.fandom.com/wiki/The_Dead_Body?oldid=19315"
Community content is available under CC-BY-SA unless otherwise noted.